I’m definitely a book worm to the core. So from now on I’ve decided to post a few of my top book recommendations. Okay, here goes.

Status:Literally just finished an hour ago.

Genre: Not your typical dystopian novel. Main character basically paints his real life to be in the Oasis, a virtual world where your identity, your gender, your fears do not matter. Somewhat like Snow Crash but so much better. Aspects of sci-fi here and there.

Rating: You have to read this or you’ll be living the rest of your life in a shell(just saying) Feelings: Tears. Love the fact that the two main characters know that love doesn’t last but are desperate enough to try.

Rating: Fans of the Fault in Our Stars, people, this is a must read.

Book: “Revolution is Not a Dinner Party”

Status: Read this a couple weeks back. I couldn’t help but put it here.

Feelings: Eye opener about the hardships one faced during Mao’s Cultural Revolution.

Rating: Won’t recommend it for people who aren’t super into history or events of the past. But if you do decide to crack the book open and give it a shot, prepare to be enlightened. 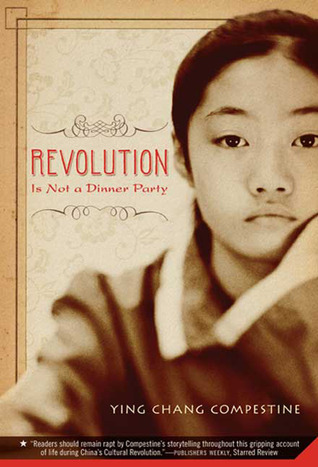 Feelings-Reminds me of the dystopian classic 1984 by George Orwell

Rating-Really digs deep into the roots of totalitarian government and the atrocities and violations against people’s natural rights. It’s a graphic novel. Status-Completed, but it was a long read

Feelings-Seemed a bit cliche at first but I loved watching each of the March sisters grow and blossom into adults(does that sound too corny?)

Rating- It’s a bit of a long book. I had to read in-between flights, homework, and the giant rock on the shoulders(aka life). Started out dull but got much better towards the end.

Book-“And Then There Were None”

Status-Just finished. I literally have goosebumps all up and down my legs.

Rating-If you’re looking for a thriller or a over the top plot twist mystery this is the book for you. Agatha Christie, the queen of mystery, does not disappoint. A story of ten individuals that are mysteriously invited onto an island and die one after another.*chills just thinking about it*

Book-“Harry Potter and the Sorcerer’s Stone”

Status-Done. This is probably my sixth time reading it.

Feelings-Aw, how the memories just come swirling back. Accio!

Rating- I’m actually quite shocked at the number of people who have never read Harry Potter(For the last time, watching the movies does not count). After the roller coaster that is “And Then There Were None”, I really needed a mood lifter or something just to wear off the horror. Anyways, it’s never too late to start. Soon enough, you’ll be sucked into the magical world that is Harry Potter.

Status-Oh man I’m not even halfway. I think this book is thicker than Harry Potter and the Deathly Hallows.*cries*

Rating- Seeing the world through one of the greatest geniuses of the century, Steve Jobs is surprising just like any other ordinary man. He worked, he fought, and he made it. This is the story not of his success, but of his painful journey to achieve something that everyone deemed crazy. Status- This book is the equivalent of mind breaking sadness.

Feelings- I don’t even want to talk about it.

Rating- I don’t think I’ve ever shed more tears for a character or for a particular book. Seriously, this has ousted “The Fault in Our Stars” by a long shot. It’s the tale of a man named Charlie Gordon, born with an unusually low IQ, is selected to be the test subject of a newly developed surgery procedure. If it succeeds, Charlie’s IQ will reach new heights. But after the success of the surgery, Charlie’s IQ slowly begins to deteriorate.

Status- Finished in a sitting. In my opinion,this is by far one of the best romantic novels out there.

Book-“Battle Hymn of the Tiger Mother”

Feelings- Opens up the harsh realities of the parent and child clash.

Rating-It was a little hard reading this story. Coming from a strict Chinese family myself, I understand where the author is coming from, wanting the best for her children, but using that “tough love” to break past the limits of her daughters.

Status-Just a few chapters in but I’m already addicted.

Rating- *Reader Discretion Advised* The aspects of a marriage gone wrong take a turn for the worst here in the novel. It’s a little far fetched but I’ll be having nightmares for quite some time. This novel was made into an Academy Award winning film.